(2 Stars) Might be good for families, but most adults are going to ask ‘Who asked her to return?’ 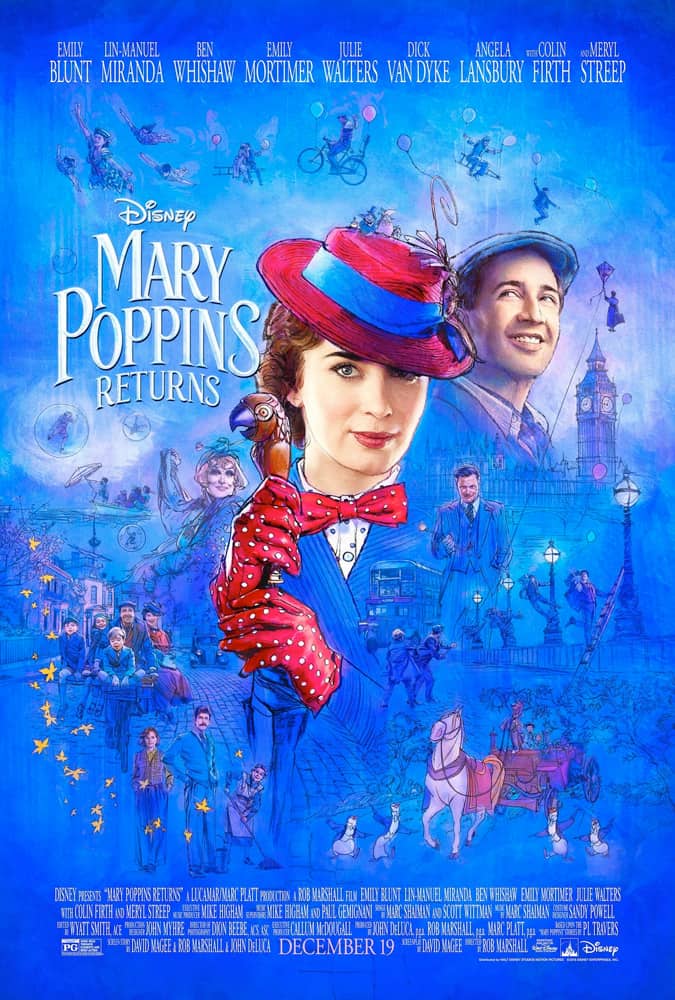 Can anyone forget the original Mary Poppins? In 1964, I was all of thirteen years old and, arguably, ‘too old’ to really appreciate a movie full of songs and fantasies and cartoon imagery. But with three younger sisters, I definitely saw that movie. And, for my entire life, I have been able to at least hum, if not sing along, to the tunes for many of those songs. “Chim-Chim Cherie”, “Feed the Birds”, “Lets Go Fly a Kite”, and, of course, “A Spoonful of Sugar”. And how many times as a teenager, or even later, did I recite the tune with ‘the longest word in the world’ “Supercalifragilisticexpialidocious”. (I suffered a smile of pleasure just typing that word!). The movie was full of songs, tied together with a pleasing, Disney story that made it impossible to forget, even now, fifty-five years later!

And then, we have the sequel, Mary Poppins Returns – which I watched just three nights ago. And, for the life of me, I can’t remember the lyrics or tune of a single song. Granted, my short term memory isn’t what it used to be (hold the explanatory comments), but I do recall some of the scenes and sets from the movie. There was a number – called “Topsy Turtle”, I think – and it was additionally fun because Meryl Streep played Mary’s gypsy-like cousin who was supposed to be able to fix things, except on the second Wednesdays of every month when her home turned upside down. Her home was an example of why the movie received a production design award, full of hundreds of detailed objects befitting an eccentric handywoman. But I can’t recall even a phrase of the song. 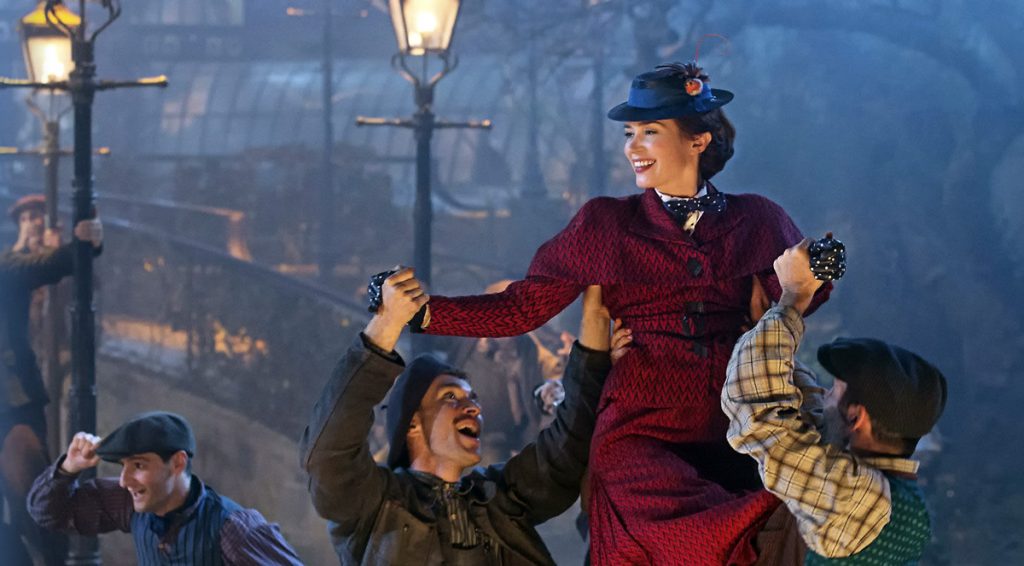 There was another scene involving Jack, a role similar to Dick van Dyke’s role in the original, and played by Lin-Manuel Miranda (of Hamilton fame). He is a ‘Leerie’, or lamplighter who with an army of companions, keeps the streetlights of London lit. He is also a good friend of Mary Poppins. In one of the most extravagant scenes, replicating a similar number in the original movie where chimney sweeps dance across the rooftops of London, the ‘Leeries’ pedal BMX bicycles over and around some of the same architecture. The scene, and others, reminds us of why it was nominated for costume design. But I can’t recall a single melody from that song either.

Finally, there is an elaborate number, or maybe a couple of numbers, where the children in this movie find themselves absorbed into the painted scene on the surface of an elaborate ceramic work. A chariot emerges which is part true world, and part animated drawing. Using that ‘Disney magic’ the children are seamlessly woven into an animated chase scene which also echoes some of the artistry of the original movie. (And it is hand-drawn, not computer generated.) There’s a song or two during that scene, but I can’t remember even the name of those songs!

The costumes, scenery, and artwork of this movie may not have been exceptional enough to win the Oscar, but they deserve nominations. There is a great deal of creative talent here. Sandy Powell was nominated for the costumes and she has a staggering 14 nominations in that category including three wins (Young Victoria, Shakespeare in Love, and The Aviator). John Myhre and Gordon Sim were nominated for Production Design (sets and art work) and they collaborated before on Chicago taking the Oscar for that work. Chicago also earned director Rob Marshall a nomination. Unfortunately his superb work in that musical, did not translate to this one.

Let’s not forget that this is supposed to be a musical. As such, it is supposed to have inspiring and memorable music. It does not. And there lies the failure of the movie. I am still trying to remember the melody of the nominated song, “The Place Where Lost Things Go”. Despite a taut and updated performance by Emily Blunt as Mary Poppins, including appealing singing; Lin-Manuel Miranda’s partnering in song and dance; and cameos from Angela Lansbury and Dick van Dyke, the music is supposed to be the reason to see this movie – and it isn’t!

Monica Castillo, of rogerebert.com, writes “(it)is neither really new or familiar, but an odd knockoff that will work for some audiences and leave others craving a rewatch of an old favorite.” And the New York Times critic Manohla Dhargis writes “What’s odd here is how closely the new movie follows the original’s arc without ever capturing its bliss or tapping into its touching delicacy of feeling. …the songs by Marc Shaiman and Scott Wittman …are the gravest disappointment…there’s nothing here with comparable melodic or lyrical staying power.”

And there you have it – I still can’t remember a single song. For the visual stimulation provided by the costumes, sets, and animation, I give it 2 stars. If you choose to watch it, well, you’ve been warned!