No Time to Die

(3.5*) No Time to Die is exactly what you expect from a Bond film. Sixty years after Dr. No, the franchise has changed, but lives on. 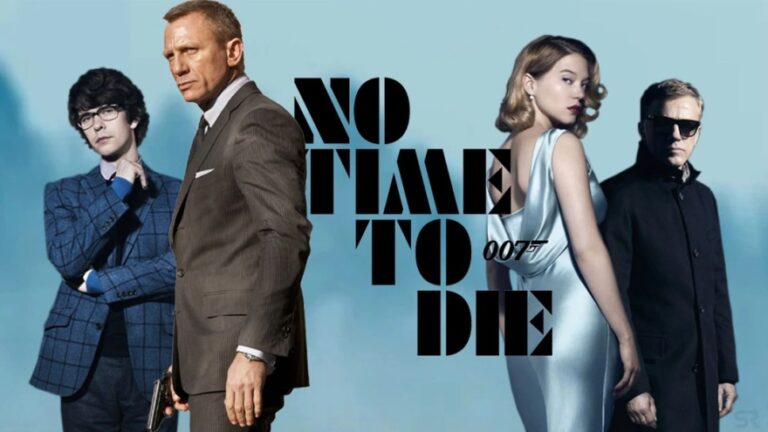 No Time to Die is pure James Bond, made relevant for today.  It is the 25th film in the Bond cinematic universe, telling the action-packed tales of the world’s favorite secret agent, working for the British Secret Intelligence Service, MI6.

The movies are based on a series of literary works by Ian Fleming, an author who had worked in Britain’s Naval Intelligence Division during the Second World War.  After the war, he began writing fictional accounts of his wartime experiences embodied in the persona of a super-spy.  The first Bond novel, Casino Royale, came out in 1952 and was an instant success.  He followed that with eleven more novels and two collections of short stories based on the character and the series became one of the best selling series of books with over 100 million copies worldwide. (The Times, of London, ranked Fleming as 14th on the list of 50 greatest post-war British writers.)

Albert R. Broccoli (American) and Harry Saltzman (Canadian) ended up acquiring the movie production rights to the Bond franchise in 1961 and shortly after began the process of converting the books to film. Dr. No, the very first James Bond film but not the first novel, was released just over sixty years ago.  They chose Dr. No as their first project only because it all took place in a single location, Jamaica – which is also where Ian Fleming lived – so the production costs could be more easily controlled.  The film cost just over a million dollars to make but ended up grossing sixteen times that in the US alone.  (Competitors at the box office that year included The Longest Day, Lawrence of Arabia, The Music Man, and Mutiny on the Bounty!). Both men are dead now, but the Broccoli family continues to own the 007 production rights.

So flash forward almost 60 years.  No Time to Die is the latest, the longest (2 hrs 43 min), and the most expensive ($250 million) Bond film ever made.  It also represents the longest-running movie franchise ever (unless you want to somehow count the time between the first and the last Godzilla film!). The most recent movie only grossed three times its production costs at the movie theater box office. (But, to be fair, we didn’t have movie streaming back then, so comparing only box office receipts is probably not accurate.)

But the duration and the appeal of the James Bond films is not in dispute, and it all started with Dr. No.  So what was in there that captured everyone’s imagination over the last sixty years?  Why has it been so durable?

One critical element is action – the incredible ‘wow’ factor.  In 1962, CGI was a fantasy of a few science fiction enthusiasts – movies simply didn’t have any.  Action sequences were earned the hard way – using stunt doubles often taking unusual risks to do sequences with cars and people’s bodies that really weren’t supposed to happen.  There are many of those in Dr. No.  And, interestingly, most of the action sequences in No Time to Die are also what they like to call “practical effects”, meaning not computer generated.  There are two major car chase scenes in the most recent film, in the first Bond is in his classic Aston Martin vehicle and the second he’s driving a LandCruiser.   Then during the first twenty minutes of the movie Bond is on a motorcycle being chased by bad guys.  The motorcycle does a ramp stunt and jump that is really outrageous and will certainly give you that wow factor.  And before that there is a scene where he jumps off a bridge that is really pretty thrilling.  So the wow factor is in the film from the beginning and, as in Dr. No, it is based almost entirely on live action stunts.

In addition to exciting chase scenes, there are also multiple fights – fist fights, gun fights, and, well, other kinds of fighting..  Bond is good at fighting and while he frequently gets beat up, he always ends up winning, even if it takes a few attempts.  One of the more interesting fight choreographies in No Time to Die involves Bond and his recent CIA acquaintance, Paloma (Ana de Armas), where both of them are dancing through a ballroom populated almost exclusively with Spectre agents and, of course, they end up not only getting away, but leaving huge number of casualties.  (Ana de Armas had incredible chemistry with Daniel Craig in Knives Out and, reportedly, he pushed to have her included in this film.  Her scene is brief, but is terrific, and a welcome female partner!)

And that gets us to sex.  Yes, Bond has always represented the ultimate male fantasy of someone who seems to be able to sleep with any pretty woman he wants.  In Dr. No, Bond’s first female conquest is Honey Ryder, played provocatively by a scantily clad Ursula Andress.  The scene where she emerges from the water dressed only in a modest bikini, wearing a knife on her belt, is one of moviedom’s iconic images.  (Craig duplicates this scene, as a man emerging from the surf, in another of his Bond films and in No Time to Die the scene is subtly modified with Madeleine Swann (Lea Seydoux) doing the honors.)

Another critical element in any Bond film is exotic locations.  Dr. No location shots were all done in Jamaica.  But part of the appeal of later Bond films, and a factor that significantly raised the production costs, was the idea of bringing strange and interesting geography and cultures into the frame.  No Time to Die was filmed in Scotland, Norway, Italy, London, and the Faroe Islands (about halfway between Iceland and Norway).  Importantly, some of the early shots in the movie are located, once again, in Jamaica.  It turns out that Bond has retired there and it is there that the puzzle of No Time to Die starts to unfold.

And that brings in another important element – a Bond film always involves a complex, world-threatening plot and some evil characters.  The two stories in Dr. No and No Time to Die are similar and you could benefit watching these two films back-to-back.  One of the villains in Dr. No, is seen petting a cat.  In No Time to Die, the villain is not petting a cat, but something much more valuable to Bond.  And there are more references, and even a consistent character between some of the earlier films and No Time to Die.  (The main villain is played by Rami Malek who delivered an Oscar-winning performance in Bohemian Rhapsody!  He’s good here, but it isn’t an Oscar-worthy role.)

No Time to Die wasn’t Oscar-nominated in any of the major categories.  Instead it was recognized for accomplishments in Visual Effects (I think mostly the incredible stunt-work) and for Sound, which is always a difficult movie attribute to fully understand.  But when a film’s sound effects are thrilling and don’t get in the way of understanding what the characters are saying, then you have good sound – and this film earns that nomination.  Both the sound and the visual effects teams have Oscar pedigrees putting them at the top of their art form.

It didn’t win either of those Oscars, but it did win the Original Song Oscar for “No Time to Die”.  Composed by mega-star Billie Eilish and Phineas O’Connell and sung by Ms. Eilish, the song, once again, doesn’t occur until the credits, which is a pet peeve of mine.  (I think that if a song really contributes to the movie, then it should occur during the movie.)  But in No Time to Die, they’ve done something a little different – her song doesn’t start until the opening credits and the credits don’t start until 24 minutes into the movie.  The opening sequences establish pretty much everything you need to know about where Bond is, who the villains are, Madeleine’s relationship with Bond (which is very complex) and, of course, the initial action sequences setting the tone for the entire film.  So, in some sense, Eilish’s somber and almost melancholic voice creates an important interlude allowing the audience to rest for a minute and dial down the emotional mood.  If the song must appear with the credits, then use the credits as an integral part of the film’s mood setting mechanics – they do that here.

But 1962 is sixty years ago and a lot has changed in the world and in the James Bond flicks.  The cultural understanding of sex, for example, has changed significantly.  Women are no longer perceived as simply sex objects, available for men to enjoy as they want.  Instead, they have agency and sex, when it occurs, is now something that all participants should enjoy and control equally.  You don’t see that so much in the early Bond films, but in No Time to Die there is really only one sexual relationship and that is between Bond and Madeleine, and it is part of something much more than a one night stand.  Paloma is, perhaps, the sexiest woman in the movie – and wears the most provocative outfit – but, interestingly, she and Bond never make it to the bedroom.  (And as has been noted by others, her role in the film is not only short, but is nearly totally opposite from how Honey Ryder behaves in Dr. No.)

Bond is older now (although not sixty years older) and so is Daniel Craig.  At 54 he doesn’t move quite as spryly as he used to.  It is my understanding that he suffered injuries doing stunts in this film and the last one, Spectre, one that even required surgery.  Craig has said that this is his last film as James Bond and the story-line seems to suggest that as well.

But the film’s last title bar is “James Bond Will Return”.  We just don’t know what that means, or in what form.  For one thing, and it is probably a good thing, women are now much more involved.  Moneypenny – always an attractive woman sitting behind a secretary’s desk at MI6 headquarters – is now out in the field doing actual spy things.  Oh, and BTW, she’s black.  And, well, Bond retired in the last film and in this one they have a new 007 – and she’s also black!.  So, times have changed and so has James Bond.  They finished making Ian Fleming’s stories into movies long ago.  Now they are just carrying on the image and the excitement and the franchise for as long as they can.

This might not be the best Bond film ever, but for anyone who loves Bond it is a must-see.  Things are changing – quickly.  (3.5*)

Stream on Prime, EPIX, Roku, Sling or rent from multiple sources, or wherever you get your discs! 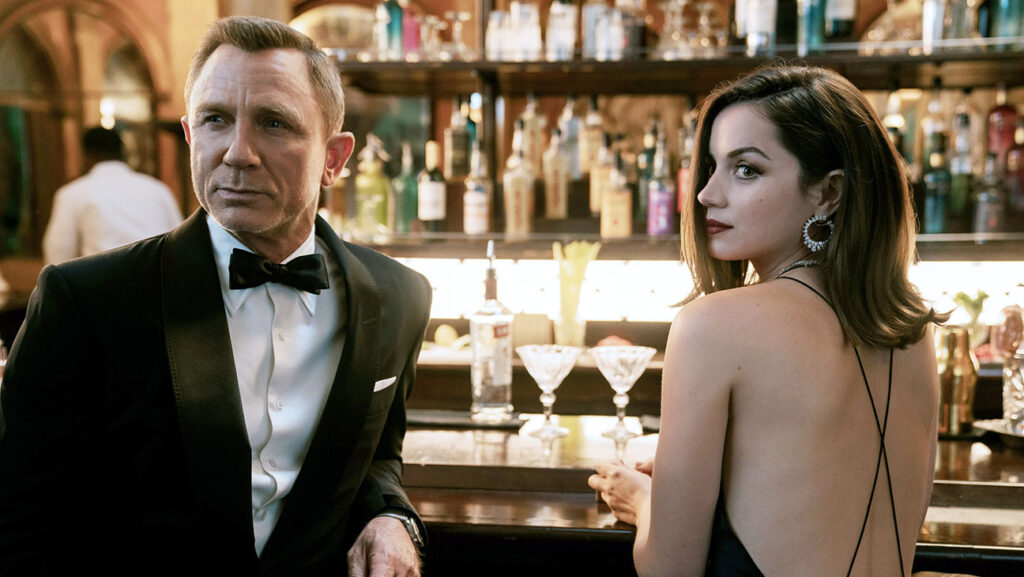