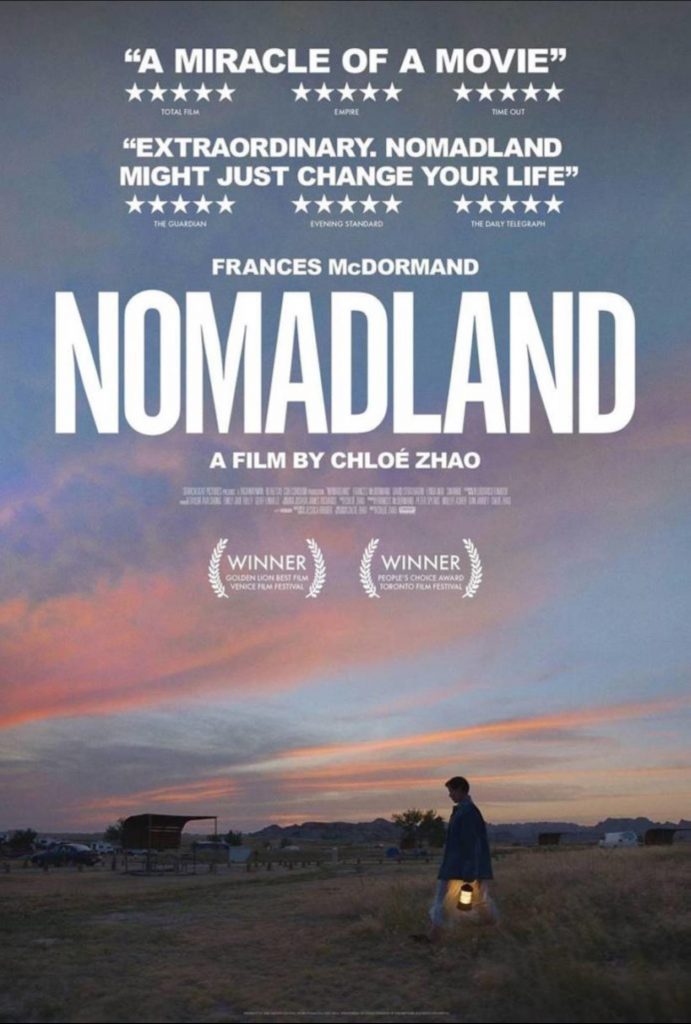 Early on in the movie, Fern (the central character played by Frances McDormand) is in her van when she suddenly grabs a big white bucket, pulls down her pants, plants her butt on top, and proceeds to noisily defecate.  This scene defines a lot of the essential character of this movie – somewhat desperate circumstances, starkly primitive conditions, and a simple, distinct, and honest acknowledgement of life’s basics.  An instructor at a camp for nomadic campers counsels that ‘You have to manage your sh*t!’ – something Fern clearly knows how to do.

The scene is representative of the curious contrasts this film manages to create.  One the one hand, there are beautiful twilight landscapes of some of the American West’s most iconic views – South Dakota’s Badlands are an important location.  On the other, there is the stark reality of people living their lives out of vans and pickup campers, moving from one RV park to another National Park Campgrounds, not because they really want to take a road trip, but because they simply don’t have any other place to go.  Maybe these ‘nomads’ live a nearly idyllic life, free of the binds that property imposes.  Or maybe they often struggle with simple things like getting enough food.  Sure you could say they have all the freedom in the world.  But, clearly, they lack the resources to enjoy it.  On the one hand there is the rich beauty of the American Dream that western landscapes seem to promise.  On the other is the stark reality of how, for many, that dream has turned into a slow-moving nightmare.

A.O. Scott (New York Times) wrote: “ This tension between stability and uprooting, between the illusory consolations of home and the risky lure of the open road, lies at the heart of Nomadland, Chloe Zhao’s expansive and intimate third feature.”  He rated it a ‘Critics Pick’ and, according to Metascore, critics generally rank this third out of all 41 Oscar nominated films (ahead of all other American-made movie!)

Ms. Zhao adapted this screenplay from a book, of the same name, by Jessica Bruder and she earned an Oscar nomination for that work, as well as for film editing. She also directed this film, garnering an Oscar win as Best Director.  And, of course, in case you’ve forgotten, the Academy chose this film as this year’s Best Picture.  (That gives Zhao four Oscar nominations and two wins for just this movie!)  To complete the intimacy of this production, Zhao’s boyfriend, Joshua James Richards, was nominated in the Cinematography category.  The critics and the Academy alike really liked this movie, and are doing everything in their power to encourage Chinese-born, Mount-Holyoke-educated Zhao’s personal style.  Ms. Zhao has a fascination with the American West, and a lean towards social realism, both found in Nomadland.

Zhao is not the only important woman in this movie.  Frances McDormand won the Best Leading Actress Oscar for her performance which Brian Tallerico (RogerEbert.com) labels “one of the most subtle and refined of her career.” (There’s that word ‘subtle’ again!). And she does just fine here, letting much of the message go unspoken.  It’s as if her purpose in this movie is to let the stories of the real nomads bounce off her; that her role is to draw out their stories.

And that concept is where I start to have trouble with this film.  I’m not quite sure Zhao really had a plan with this film – it’s kind of like she simply allowed everything to come together.  Was she directing it or just reacting to events around her?

It certainly has a strong element of documentary to it.  Supposedly, the scene where Fern craps in the bucket was absolutely real – McDormand had a case of indigestion, was in the van with the cameraman, and, had to relieve herself – so she did! With the camera rolling!  Now is that acting or is that a documentary filming the events as they happen?

And what about the fact that McDormand and David Straithairn – playing something of an romantically interested partner – are the only two real actors in the film?  All the rest of the nomads are ‘real nomads’ – people living out of their vans and campers and traveling around the campgrounds of the West.  In fact, the ‘documentary’ nature of this movie is so much a part of its fabric that the nomads never realized until near the end that McDormand was not really one of them.  Apparently they thought the film crew – living out of vans and campers just like McDormand – were there filming Fern as a documentary of nomad life.

I’m not sure how I feel about that – I’m having some issues about integrity.  In my review of The Mole Agent – one of this year’s labeled documentaries, I criticized the movie because it was filmed under false pretenses – they had hired someone to play a role which they then filmed in interaction with nursing home residents.  In my view, that was misleading the residents, manipulating their feelings, and then filming the results.  How is that different from this situation? Frances McDormand is definitely not a ‘nomad’ in real life, regardless of the fact that she lived that life for a few weeks and acted, however well, the role.

But its not just a question of what ‘category’ the movie belongs in – documentary vs drama. The issue has more to do more with blurring the boundaries between the subjects of the film and the filmmakers and the resulting artificial relationship between them.  It also suggests a lack of clarity of purpose on the part of Zhao.

This lack of clarity finds its strongest expression in one of the key failures of this film. While it seems to work fairly well in striking an empathetic response toward the nomads, it fails, in my opinion, in being sufficiently strong in telling where the responsibility for their situation lies.  The movie talks, at the beginning, about the company town of Empire, Nevada and how the closure of the US Gypsum mine there resulted in the closing, five months later, of the entire town.  That is the event that sent Fern, and others like her, out on the road – too poor to buy a home and too old, really, to find another job.  US Gypsum essentially abandoned her after many years of her husband’s contribution to corporate wealth.

And then there is the periodic employment the nomads obtain at Amazon warehouses.  Their work there is hard and, almost always, temporary.  While working, they are given a campground permit.  But once they no-longer work there, they are, again, on their own.  It is interesting that just in the last couple of weeks, the New York Times had a story about the turnover at Amazon warehouses being extremely high.  The Times goes on to report that this turnover is actually by design, reflecting a belief by Amazon CEO and founder Jeff Bezos that workers are inherently lazy and the best way to achieve high productivity is to make sure workers have high levels of insecurity and that turnover is rapid in order to ensure ‘fresh blood’.  Unfortunately, instead of portraying Amazon as an organization in a feeding frenzy on the limited resources of the nomads, Zhao, instead, presents it as more of a rescuer – a place to earn a few bucks when needed.

So the Academy and most of the critics loved this movie and showered it with words like ‘subtle’, ‘grounded’, ‘genuine’, ‘honest’, and ‘empathetic’.  Interestingly, those are the same words they all used to describe Minari, another movie where I disagreed with most of the critics.  And, like the case with Minari, the viewing public isn’t nearly as enthusiastic about Nomadland as the critics.  The IMDB audience rating places this film 17th out of 41 Oscar-nominated movies, pretty much right in the middle.  Curiously, this movie and Minari are coming up with nearly the exact same issues in terms of critical acclaim and popular approval.

Look, I love Frances McDormand and thought she was terrific in Fargo, North Country, and Three Billboards Outside Ebbing, Missouri.  But just because she can take a crap in a bucket, does not, in my opinion, earn her a Best Actress Oscar.

Maybe because I own an RV, have spent a lot of time in both commercial, state and national campgrounds, and have actually seen a lot of what we called ‘full-timers’, and because my wife and I are really just one major life crisis from being nomads ourselves, I don’t think this movie is nearly strong enough.  It fails to truly articulate the real reason these people are where they are.  And if its value as a movie is more of an expose on a really awful situation, then it doesn’t make it awful enough.  This topic does not deserve ‘subtlety’.

MaryAnn Johanson (the FlickFilosopher) is one of the few critics who did capture the real message in this tragedy.  She called Nomadland “…a bittersweet dirge for those Americans who have come to realize that the promise of the nation has always been limited and exclusionary, and for far too many, an absolutely empty promise.”  Simply put, this movie needs more anger.  (3.5 Stars) 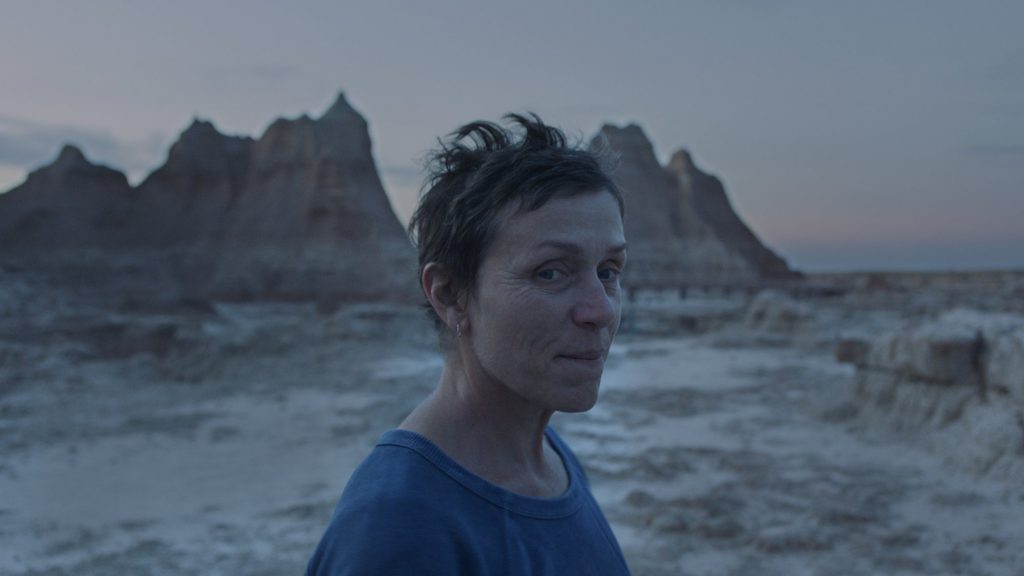