One Night in Miami

(4 Stars) A captivating evening with four icons of history. 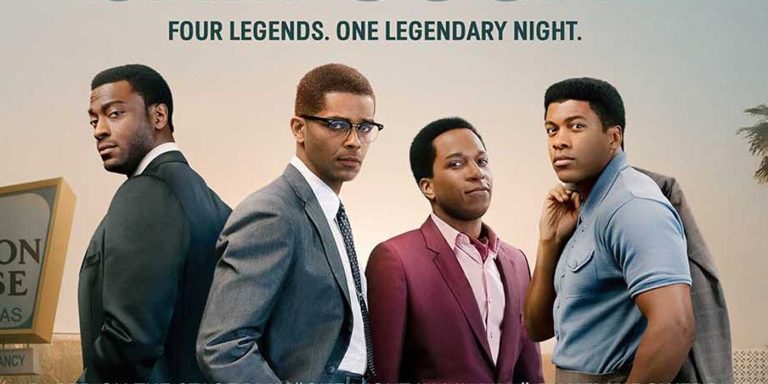 Two athletes, a singer, and a politician walk into a bar…

A setup for a bad joke maybe?  Ok what if we change it to

A football player, a boxer, a singer, and a politician – all Black – step into a economy motel room…

OK, but what if it becomes Jim Brown, Cassius Clay, Sam Cooke, and Malcolm X?  And they are gathering for an evening of talk and celebration after Clay, against 7 to 1 odds, defeats Sonny Liston for the World Heavyweight Boxing championship on February 25, 1964 in Miami.  Still sound like a joke, or did it just become immensely fascinating?

Such a meeting actually did occur with those four people and on that date, and this movie is a fictionalized account of what happened.  There were no observers, and no cell phones, recording the conversations so exactly what happened, or what was said, is not really known.  (Only Jim Brown is still alive and, as far as I know, he has not commented on this movie’s portrayal of that night.)

But it is entirely possible that the conversations that night would change the lives of, not just those four men, but the course of political and social events across the nation.  The day after this gathering, Cassius Clay announced that he was converting to Islam and changing his name to Muhammad Ali, in a move that confounded both Black and white Americans, but reaffirmed his belief that “I don’t have to be what you want me to be – I’m free to be who I want!”.

Jim Brown, who in 2002 was named the ‘greatest professional football player ever’ by The Sporting News, retired from professional football later that year.  In addition to something of a movie acting career (The Dirty Dozen), he also established a Black economic union and an organization to aid people post-incarceration.

The other two, Sam Cooke and Malcolm X, were both dead within a year.  Malcolm X, at the time of the Miami events, was embroiled in a dispute with the Nation of Islam leader Elijah Muhammad, particularly over Elijah’s philandering and fathering of illegitimate children.  Malcolm left the Nation of Islam later that year, joining the Sunni Muslims.  Always under surveillance from paranoid Hoover’s FBI, he was assassinated in suspect circumstances in February of 1965.

Sam Cooke, the singer, gave us memorable songs like Chain Gang, Good Times, and a Change is Gonna Come, and 26 other Top 40 Pop Singles.  In the early 60’s Cooke created his own record label and was actively promoting himself and other Black singers.  He was killed by a motel manager under circumstances that are still not clear in December, less than nine months after the event in this film.

Despite their different professions and interests, all four of these men were icons and models for the Black community.  And they were all at some kind of crossroad in their lives, and their meeting, while not documented, had to be one of the most interesting gatherings in recent history.  That they were friends is not in doubt, so the conversations that night had to be personal and, in ways we can’t know for sure, expressive of their strengths and vulnerabilities.

The nominated screenplay, by Kemp Powers, is one Black man’s imagining of what happened, but the words, and the emotions, ring true.  Originally a play, Powers rewrote it as a screenplay hoping for a bigger audience, and succeeds in drawing out the emotions and the intellect of these men in ways that are not common.  While dramatic license was liberally taken (did Malcolm X really travel with a Bob Dylan LP in his suitcase?), the conversations seem not just real, but likely.  The emotions are, at times, threateningly intense – I couldn’t help but compare the arguing to Who’s Afraid of Virginia Wolfe.  A key difference, though, is that these men were pretty much sober and still managed to make piercing observations of each other’s behavior.

The underlying theme here is an examination of the role of Black celebrities in the still ongoing struggle for equality.  Malcolm X, caught in his own issues of following a man he was losing respect for, was, at the same time castigating Sam Cooke for not doing music that was as supportive for ‘The Struggle’.  Jim Brown, not able to enter a white man’s house to help him move furniture, questioned whose world he was really serving.  Cassius Clay, the boxing braggart, was still Black and knew, in the end, that this limited his options.

Director Regina King (Supporting Actress Oscar winner for If Beale Street Could Talk) was in her debut as director of this film.  What is remarkable in my view, is how she is able to capture the subtleties of black male interaction.  If she can continue this kind of understanding, we can expect great movies from her, beyond her extraordinary acting abilities.

The four actors playing the lead roles are largely unknown to me.  However, not only do they look amazingly like their real-life characters, but they also nail many of their nuances.  Eli Goree recreates Clay’s braggart persona at the same time that we feel a sympathy for the young man.  Kingsley Ben-Adir maintains Malcolm’s serious side while conveying his love for his family and his people.  Aldis Hodge captures big Jim Brown’s ambivalence while acknowledging his status as a football legend.

Of the four, Leslie Odom Jr, nails his Sam Cooke character more than the others (and why he received a Supporting Actor nomination).  Odom is a singer and he performed six of the Sam Cooke songs featured in the movie, as well as the Oscar nominated song performed during the credits (that’s a pet peeve of mine, but oh well).   Odom’s breakthrough performance was as Aaron Burr in Hamilton, but I suspect we will be seeing much more of him.

One Night in Miami will not appeal to everyone.  It is clearly not an action movie and, if you require your movies to be like an amusement park thrill ride, this won’t work for you.  But if you are engaged by the struggle of ideas and the interplay of emotions, then this is something you should see.  It is telling that a story about the Black struggles of nearly sixty years ago are still relevant today.  But this film is not just about what it means to be a Black man, both then and now.  It is also about where we, as a people, succeed, and fail, today.

PrevTenet
News of the WorldNext