(4 Stars) Surprising animation with an imaginative visualization of the internet and a wonderful interlude with the Disney Princesses. 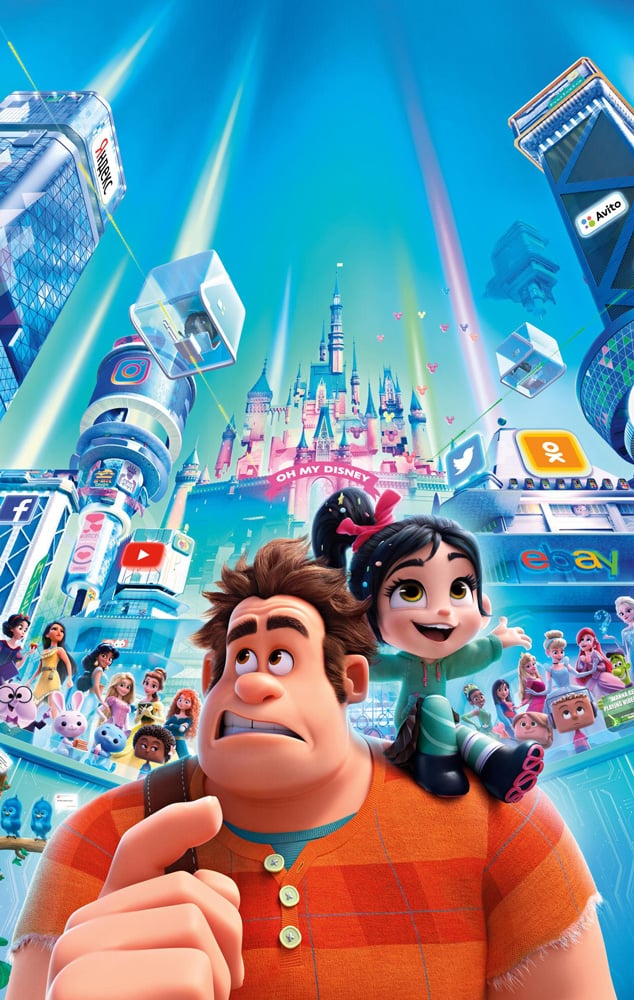 This is the third animated feature I’ve seen in as many weeks and, with just one more movie, I am about ready to finish up the list of 37 movies nominated for Oscars in 2019. Although I had anticipated that the animated feature movies would largely be disappointments, I can report that I was definitely wrong. There is more depth to these animated features than I had given them credit for. Although the stories are often comic-book style, action hero stuff (Incredibles 2, Spider-man…), the presentation itself is usually noteworthy and they invariably invoke discussion, sometimes more than some of the other genres. I have now seen four of the five nominees in this category (Mirai is the last one, coming up this week) and they all have interesting points and, amazingly, they are all worth viewing.

We watched Wes Anderson’s Isle of Dogs months ago, largely because it was also nominated for its original score. That was a fascinating movie borrowing many features from his Grand Budapest Hotel, including interesting perspectives, a weird, often comic, story-line, intriguing and appropriate music, and always something different to throw you off guard. I had assumed that was going to be the highlight, for me, in this category.

Incredibles 2 seemed to confirm my suspicions because, despite it being very highly regarded by both audiences and critics, I didn’t find much to make it unique. It tries to be a comic book action movie, but after viewing the Avengers, Black Panther, and Ready Player One, the animated Incredibles family really didn’t have anything to add. At best, I could see the Incredibles 2 as a ‘training movie’ to try and get really young viewers ready for the more intense live action movies.

Then came Spider-Man: Into the Spider-Verse which, admittedly, I wasn’t properly prepared for. Instead of a cartoon feature for younger viewers (like the Incredibles movie), Spider-man was an entirely different, complex, and intense experience. Although it definitely helps to be versed in the complexities of the Marvel Comic Universe (the MCU, as they say) in order to appreciate the many in-jokes, Easter eggs, and ‘historical’ references, there is still much to enjoy in the juxtaposition of different animation styles and their use in portraying different versions of the same character. Because I wasn’t ready for this deep of a movie, I gave it only three stars, but acknowledged that it probably deserved four!.

So, going into Ralph Breaks the Internet, I really wasn’t quite sure what to expect. This one wasn’t rated as high as the Incredibles or the Spider-man movie, so I was figuring it was probably more of a dud – I was expecting it to be as disappointing as the Incredibles 2 movie.

The first twenty minutes or so confirmed my expectations. Unlike the Incredibles movies, I hadn’t seen the original Ralph movie (Wreck-it Ralph) so I didn’t even know that the main characters (Ralph and Vanellope) are actually characters in older-style video games. Apparently, at the end of that first movie, Ralph, who had well-earned his ‘Wreck-It’ moniker, becomes best friends with Vanellope (who drives race cars in something like Mario Brothers racing game). As this sequel opens they are living a rather hum-drum existence in their video arcade games and spend their off-duty times (when the arcade is closed) drinking root beer at the tavern. They also interact with other characters from the earlier movie.

Then, as in real-life, their world is thrown upside down by the introduction of The Internet, and this is where the movie takes off. This is an adventure movie where Ralph and Vanellope are on a quest to find, of all things, a steering wheel to fix Vanellope’s arcade machine. To find it, they must enter this strange new world which is so much bigger and challenging than their small and primitive video arcade.

It is the portrayal of ‘The Internet’ that scores this movie at least one extra star. I have never seen a more effective way to portray the technical complexities of the web in such a visual manner. In RBtI, the internet is a huge city, much like New York. Web-sites are buildings and they each display proud signs like Amazon, YouTube, Facebook, Twitter, and of course, one of the tallest of them all, Google. As a user, you travel through the air as an avatar, packaged in small pods or bubbles (data packets, in technical-speak). As you navigate around different streets and buildings, you are perpetually pestered by people demanding that you click on their sign (i.e. pop-ups). That is, of course, if a particular kind of cop is not around (a pop-up blocker).

This is just a small sample of the characterizations that the movie uses to make ‘The Internet’ a real, visual, place with texture and context that is difficult to imagine in real cyber-world. The imagination in this portrayal is simply delightful and I found it mesmerizing to absorb. One of the most important take-aways from this movie is a way of understanding one of the most arcane and complex technological marvels in our world today – for that you should see this movie.

But that isn’t the only reason. Another key element are the cultural references, which play out in humorous and, sometimes, more serious ways throughout the story. This isn’t the first movie to do this, not even this year. I enjoyed the way Spielberg kept referencing cultural icons of the 80’s in Ready Player One. And this movie repeats some of that, especially since it involves arcade games. But this is also a Disney movie – although not a Pixar animation. And that opens up a huge treasure box of potential references, many of which are pulled out and used here. We see multiple references to Star Wars characters and several cameos from action heroes from the MCU world. 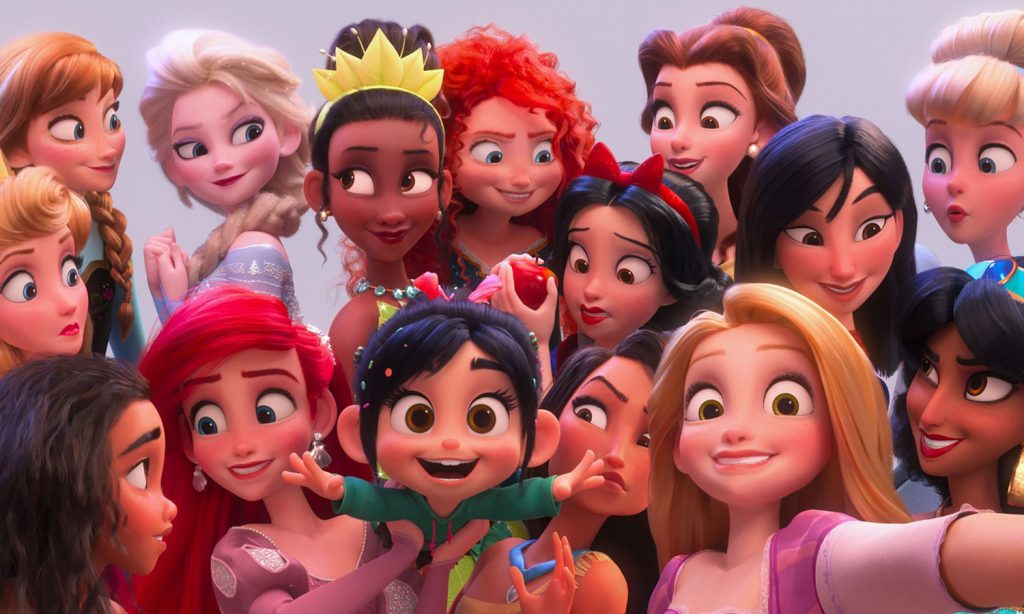 The best references, though, come straight from earlier Disney animated films, especially the ‘princess’ features. From Alice in Wonderland to Moana, it seems that nearly ALL of the old Disney princesses are resurrected in this movie, and not just with small cameos. There is an extended sequence in the middle of the movie where Vanellope becomes involved with them as she is trying to learn her place and they – the princesses – are trying to determine if she is now one of them! The self-deprecation and inner directed humor is both touching and hilarious as everybody is changed by their interaction. In the end, it is determined that Vanellope MUST be one of them because she doesn’t have a mother and she always being saved by a big, strong, man (I.e. Ralph). The entire exchange is a stunningly fresh self-assessment of what being a Disney Princess means, and what it might be changing into. (Note that in this movie they actually recalled almost all of the original voice actresses to vocalize the princesses; so you actually do hear Ariel singing, just like she sang in her movie. Vanellope gets a song too!)

In the end, there is of course a moral to the story. And it has something to do with the notion that a truly good friend never constrains you and indeed actually helps you achieve what you need to do to realize yourself, even if it means that you won’t be together as much. In our ever-shifting world, that is an important lesson to learn and it probably becomes the teaching point for adults with their young children in this movie.

But even the adults, maybe especially the adults, will have fun with this movie. If you grew up with Disney princesses and/or the Internet – and that doesn’t exclude very many people – you will enjoy this movie. Again, I disagree with the critics, but this time, I like this movie better than they did. I give it 4 stars just for the fun of it.

PrevSpider-Man: Into The Spider-Verse
2019 Oscar Movies in ReviewNext