Spider-Man: Into The Spider-Verse

(3 Stars) A bit deep for those on the edge of the comic book world, but the different animation styles, all in one movie, are fascinating. 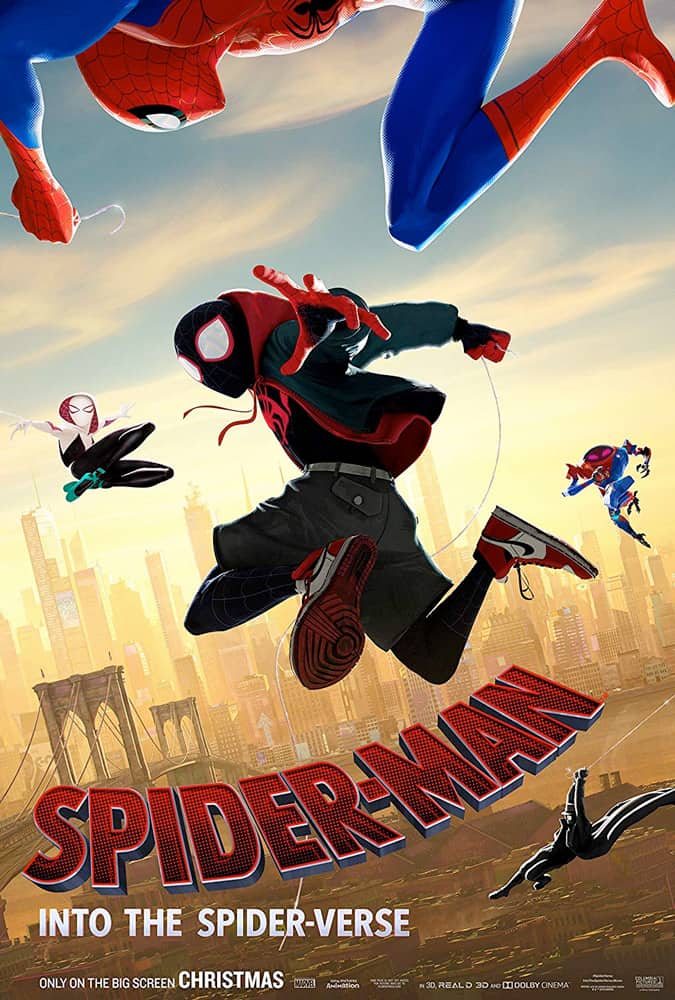 Writing a movie review, for me, is not just about rattling off my emotional reactions to the movie – I don’t just spout a list of likes and dislikes and expect that whoever might read my review is going to blindly accept that list, and then make a quick decision about whether to watch the movie or not. In the first place, I like to wait a day or two before writing up my thoughts, to allow the movie to sort of stew a bit.

Sometimes I find that my initial response was based on a visceral reaction and, after letting it sink in, I come away with a different message. Sometimes for the better, sometimes not.

The other thing I like to do before writing a review is what I call ‘research’. This includes looking at things like who the director, writer, and actors are and what they might have done in the past that I either liked, or disliked. It also includes learning about things like the movie’s budget, gross earnings, and even where, around the world, it was filmed. Intentionally, I don’t do my ‘research’ before I watch the movie so I can avoid as much prejudice as possible.

The post-viewing research also includes looking at what professional critics have written about the movie as well as some of the audience reaction to a film. And I do that not because I want to slant my perspective to be closer to what the critics say, but rather so I can learn more about how to view a movie. Professional critics often see things I didn’t get, for one reason or another, or they view a particular scene or aspect of the movie with a different perspective than I did. It is a good thing to learn from others and to never assume that one’s own opinion is the only one worth having.

Sometimes, though, looking at a movie from another critic’s perspective can lead to a feeling of acute inadequacy and a conclusion that I so badly misjudged a movie that, not only should I give up writing reviews, but maybe I should stop seeing movies altogether and go do something else entirely.
That’s happened with several movies this year and it’s gone both ways. Sometimes I like a movie more than the critics did, as in Bohemian Rhapsody, Green Book, and Never Look Away. For some reason, I’m OK with these disagreements – I mean, liking something that other people don’t rarely gets you in trouble. The problem is more acute, though, when you really dislike something the critics adored. When that happens it makes me feel uncomfortable – like maybe I’m being obtuse or ignorant. And it makes me wonder how I got it so wrong.

That has happened three or four times this year, with two foreign language films (Cold War and Shoplifters) and then again with this one – I, at least initially, didn’t like this movie but the critics and the audience loved it. The IMDB Critical MetaScore puts this movie in the top quarter of all the 37 movies nominated for Oscars. And the general audience rating ranks Spider-man number three, just behind the Avengers: Infinity War blockbuster. 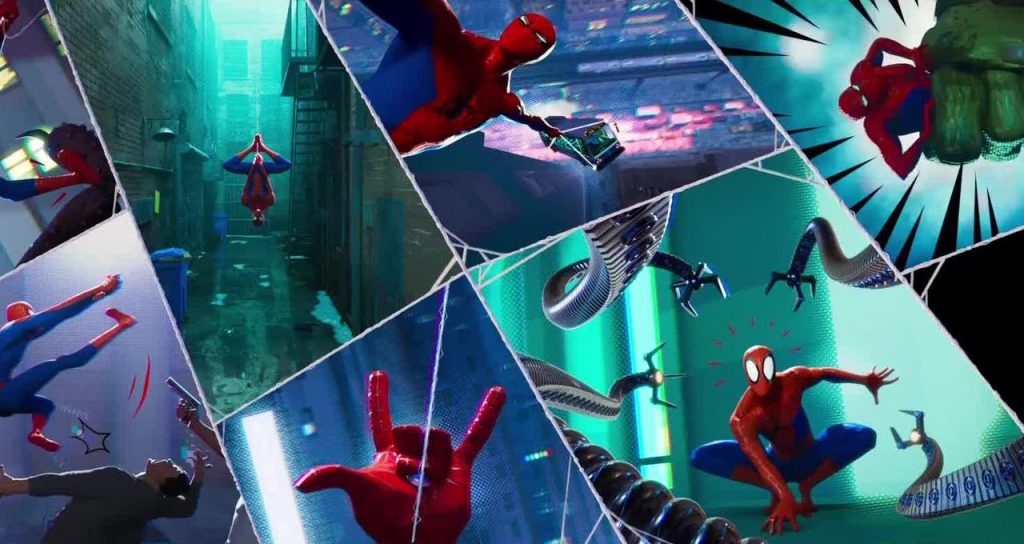 My initial reaction, after watching it, was that it was visually stimulating, if a bit messy, but the story was a bit trite and lacking in depth. Our four-person ‘movie Group’ couldn’t wait to get through the movie so everyone could go home and go to bed. Andy even chastised me for not abandoning the movie half-way through so he could ‘move on to more important things.’ (I, of course, insisted that at least I would watch the entire thing.)

So the next day I started digging into this movie, not expecting a whole lot. But I was actually quite surprised. In short order I learned: This was Stan Lee’s last cameo appearance before he died. (Stan Lee is considered the original creator of much of the Marvel comic book series and he died this year. He makes several cameo appearances in this movie – animated of course – including a voice part.) This was also just the sixth movie to win the Animated Feature Oscar that is not from Disney/Pixar. Miles (the protagonist who becomes Spider-Man) is the first biracial superhero (he is black and Puerto Rican). It turns out that part of the huge appeal of this movie is that it opens up the super-hero universe to non-whites! What a concept!

Next I looked at some of the people involved in the movie to see what their credentials were. The directors (three of them) included some credits on things like Wallace & Grommit and the Minority Report as well as several movies and TV shows that I didn’t know anything about, and the writer (Phil Lord) was involved in the LEGO movie, which I didn’t like (although, again, the critics raved about it). The voice actors, though, included Oscar nominees and winners like Hailee Steinfeld (True Grit), Mahershala Ali (Green Book and Moonlight), and Lily Tomlin (Nashville). Ali, especially, has a significant role as Spider-man’s uncle who isn’t quite what he seems to be. So, I get it – there are some talented people involved. 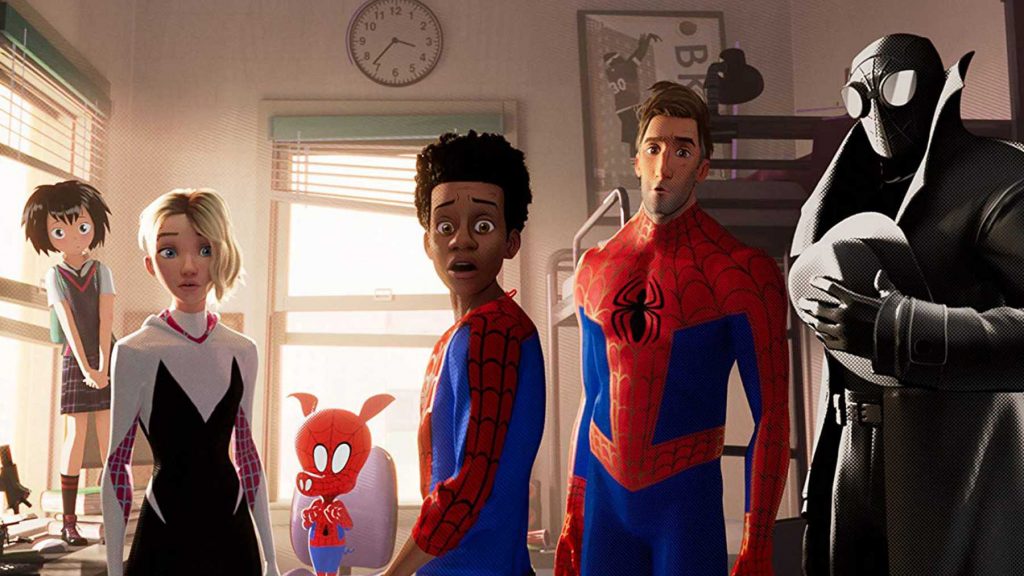 Finally, then, I read several movie reviews to see exactly why they thought this movie was so terrific, and to try to understand what it was that I missed. Mary Ann Johanson (the FlickFilosopher) I knew would like it because she is an admitted fan of comic-book movies. She wrote that the movie “…does something new, something uniquely animated with its animation…Visual styles collide here like universes collide: in a way that’s at once dangerous and synergistic, complementary yet clashing, the familiar suddenly tinged with the strange.” Whoa, I thought – did we see the same movie?

Well, yes. James Berardinelli explained it “The movie is a blast and by using a plot device that causes a rift between different dimensions/universes (the movie) has been given an incredible amount of latitude in terms of characters and style.” You see, in this movie, there are multiple Spider-men and that’s because this bad guy has created a ‘rift in the space-time continuum’ which allows multiple universes (six of them in this case) to all converge at the same point. Thus six different Spider-men actually occupy the scene at the same time.
Now consider just for a moment what you can do with six versions of the same character! In addition to Miles, the young Spider-man just learning the ropes, you also have – from different universes – a Peter B. Parker, a Peni Parker, a Peter Porker, Spider-Man Noir, and Spider-Woman (Gwen). Peter B. Parker is an older and paunchier (jokes are made about that) version of Spider-man and is presented in a visual style that moves a little slower than the others. Peni Parker is ethnically Japanese and her style is very much like Japanese anime. Peter Porker is, well, a pig who reminds us a lot of Warner Brother’s Porky (and there are jokes about that). Porker is presented in a flat – two dimensional style that is exactly like the Porky the Pig cartoons we all remember (and most definitely not like computer generated animation of today.). Spider-Man Noir (voiced by Nicolas Cage) is straight out of the film noir comic book era and is portrayed in stark lines and only in shades of black and white (except for his Rubik’s Cube). And finally, Spider-Woman is the first female Spider-person (voiced by Hailee Steinfeld) and moves with a fluid and confident nature befitting a female superhero.

The point is that the movie is a hugely complex combination of characters, visual styles, and dimensions that, in the first place, are only possible because of the outrageous plot device. But, in the second place, it will challenge even the most ardent comic book fan. I certainly didn’t know that there were all these different comic book styles and traditions, and I certainly wasn’t prepared for the combination of them in a single movie. Even the stodgy New York Times columnist A. O. Scott wrote “This animated reworking of the Spidey myths is fresh and exhilarating in a way that very few of its live-action counterparts have been.” Even Scott like this movie!

Obviously there is a complexity to this movie that I wasn’t prepared for. Somehow I guess my childhood missed the comic-book phase and, as a result, I don’t understand the many references, not just to comic book characters, but also to comic book styles and the intricacies of the art form as it evolved over time. There is, apparently, more to this movie than met MY eye. Maybe we are moving more and more into a world where it just isn’t possible to understand, or even appreciate, all things, even Oscar-nominated movies. (I give this movie 3 stars, but it probably deserves 4.)