The Ballad of Buster Scruggs

(4.5 Stars) A Coen Brothers film and a collection of six stories, each of which will puzzle and amuse. 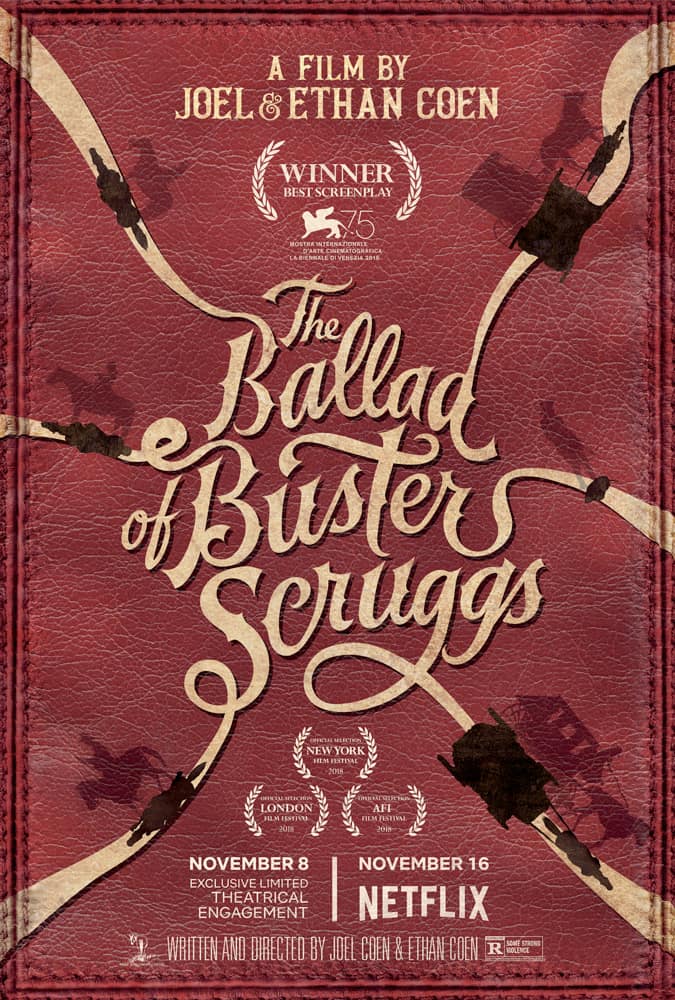 Yep! There’s a lot of storytelling and a lot of dying in this movie. This year’s entry from the Coen brothers continues to demonstrate their exceptional ability to craft storylines using humorous and compelling language while articulating profound human themes.

This movie is an ‘anthology’, or collection, of six short stories, all set in a U.S. ‘western’ mode. It was filmed, mostly, right here in New Mexico, with one story filmed in Nebraska and another near Telluride, Colorado. And the locales are stunningly beautiful, exposing the raw beauty of ‘The West’. The cinematography and production design are all just perfect to the story line and executed by Oscar-nominated figures who have worked with the Coens on films like Inside Llewyn Davis, No Country for Old Men, True Grit, and Hail Ceaser. Mary Zophreys, nominated for her Costume Designs for this movie, previously won that Oscar for La La Land and True Grit, the latter also being a Coen brothers movie. Her work seamlessly merges with the themes of each of the stories as she, essentially, had to create costumes for six different movies, all within a Western context.

The movie also received a nomination for Best Original Song. David Rawlings and Gillian Welch composed “When a Cowboy Trades His Spurs for Wings” specifically for the first segment in this anthology. Clearly, it is a country/western song about a cowboy dying. As it is performed by the title character, Buster Scruggs, it establishes the theme of the movie that is carried through the rest of the stories. Cowboys sing songs, tell tales, and, well, they also die!

There are, of course, actors in this movie, but I can’t say that any one of them absolutely steals the show. Perhaps that is because, as six different short stories, no role occupies the entire scope of the movie. James Franco, Liam Nelson, Tom Waits, Zoe Kazan, and Tyne Daly are all actors I recognize, but there are a couple dozen more in various roles. Each of them do fabulous jobs, but, in the end, this movie is not about the acting.

Let’s face it, the Coen brothers aren’t famous for their choice of costumes, music, or actors. What they bring to the table is an unerring sense of what it takes to spin a really engaging story. And they do that here in spades. The ‘above-the-line’ nomination for this movie went to the Coen brothers for their screenplay. Adapted, in part, from two stories, one from Jack London, the best selling author of his time (late 1800s) and another from Stewart Edward White, another turn of the twentieth century writer, the Coen brothers have constructed another tightly choreographed script that illustrate terrific humor melding into almost-macabre and disturbing tales of death and human impermanence.

The Coen brothers, as they do in most of their movies, starting with Fargo and including O Brother Where Art Thou, A Serious Man, True Grit, Bridge of Spies, and No Country for Old Men, manage almost the full spectrum of their movies, from writing, to directing, to editing. Altogether, they have received fifteen Oscar nominations and have won four Oscars, three for No Country for Old Men, and one for Fargo, two terrific movies. 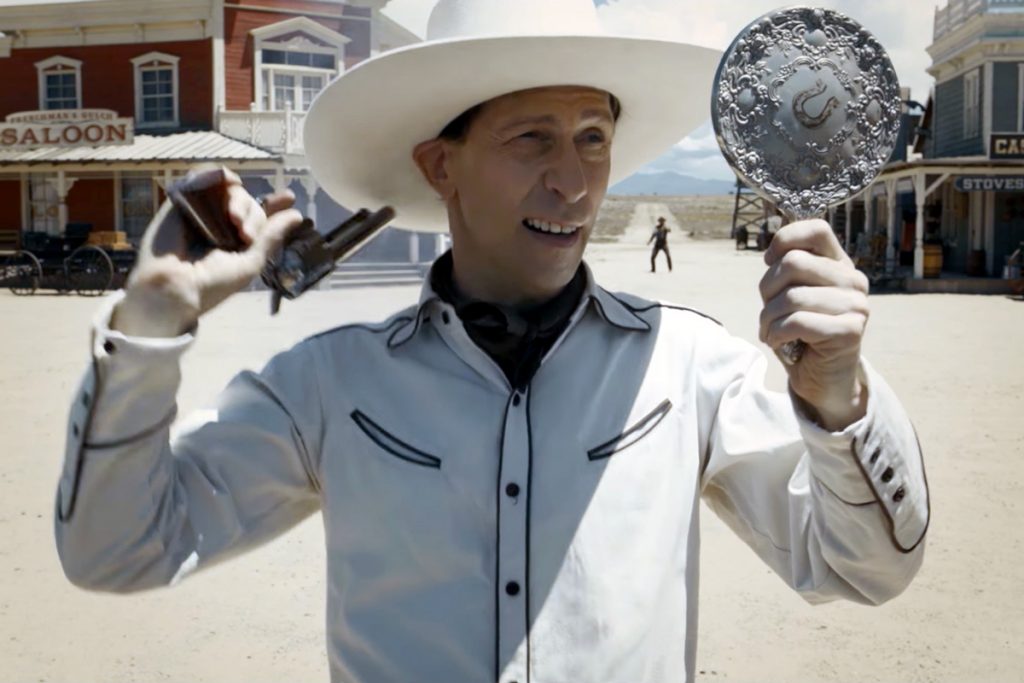 Seven of those nominations were for their screenplays and, I believe, it is as writers that they demonstrate their most outstanding movie-making skills. All of their scripts are not only tight and compact, but almost lyrical in composition. They have a deft touch with language and, frankly, are surprising in their choice of words (Zoe Kazan has a remarkable line that actually includes the word ‘apothegm’ – which may, or may not, be an accurate rendering of how they spoke in that time and place, but is, none-the-less, both funny and mind-bending in the context of the movie.)

They also know how to spin a tale that keeps the audience intrigued throughout the movie experience. This is a long movie, especially by Coen-brother standards. But you hardly know it. Perhaps that is because it is structured in six distinctly different vignettes. The first one, the title story about Buster Scruggs, is about death and dying, but is told in a nearly farcical style. Scruggs is a mythical cowboy, dressed in white, with a deadly gun, a contemporary guitar, a loyal horse, and a reservoir of songs which he sings directly to the audience. He also has an uncanny sense of geometry which he uses in a card-game with devastating, and violent, results. A second story includes a two-word punch line to a joint hanging joke that will leave you laughing out loud.

The third story turns a bit more than strange, centering around an actor, with no arms or legs, who, unfortunately, is way-too-dependent on Liam Neeson’s character who views him only as “A Meal Ticket”. Then there is a gold prospector, staking out and carefully locating a ‘mother-lode’ who somehow manages to escape from a death experience. And, later, a woman who, although she knows the word ‘apothegm’ has no idea what she is doing as she proceeds West in a wagon train.

And, finally, there is the story where we reach the edges of the Twilight Zone. As they travel in a stagecoach, the five occupants tell their tales, one after another, saying exactly what they think life is all about. At the end of their journey, and the movie – and after watching the other five stories – you will be asking yourself whether you would open that door.

This movie did not make it into the Best Picture Oscar category, and I am really not sure why. It is a violent movie (there is a lot of death), and if that is particularly aversive, then you can’t watch it. But if you want an engaging tale that stimulates your senses with the visuals and your mind with the stories, then you have to see this movie. You will think about it for days. I give it 4.5 stars.