(4 Stars) An intriguing portrait of two men arguing the nature of the Pope, the Church, and society. 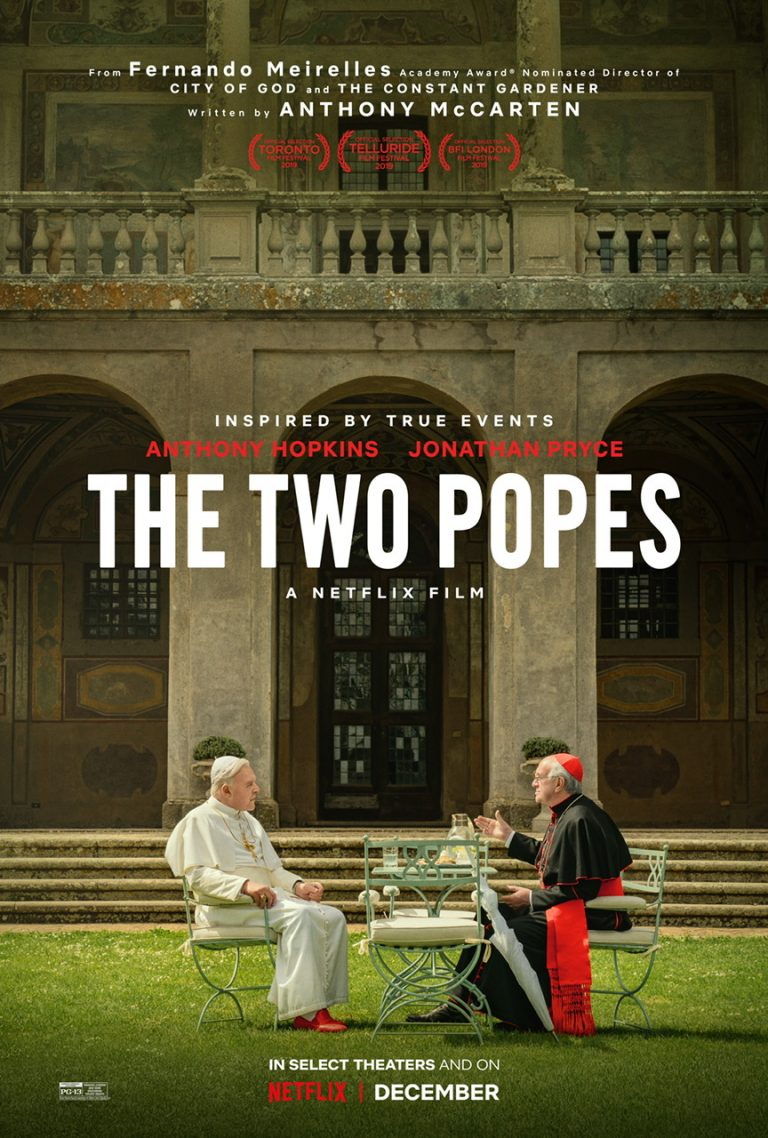 Pope Francis (in the movie): “Confession cleans the sinner’s soul, it doesn’t help the victim.  Our whole church is in need of forgiveness.  Where is our humility: Sin is a wound, not a stain.  It needs to be treated, healed.  Forgiveness is not enough.”

In this movie, a story is revealed of how the current Pope Francis came to occupy his position, replacing Pope Benedict who became, unusually in the last several centuries, a sort of Pope emeritus.  It is a moving story of two unusual men who, over the course of several hours, have a couple of monumental conversations that probe the heart and soul of, not just the Catholic Church, but also the moral complexity of our modern times.

Anthony McCarten wrote the script based on a play he wrote a few years ago.  McCarten wrote recent important movies like the Darkest Hour and Bohemian Rhapsody and was Oscar nominated for The Theory of Everything.  This movie turns on two very-long conversations between the Two Popes, the first on the grounds of Pope Benedict’s summer ‘castle’, and the second in a small room off of the Sistine Chapel.  In the first of these conversations the two men explore the modern history of the Catholic Church and how each of them have responded to the call of church leadership.  Benedict comes from a conservative Eastern European background and argues strongly for the roles of tradition, ceremony, and the maintenance of central control and authority.  Cardinal Bergoglio hails from a much more modest Argentinian history, believes the church must play a role in the moral leadership of its people, including ministering to the poor and needy.  After examining his life and his role in the current church, he has offered his letter of resignation, which Pope Benedict refuses to acknowledge.  Bergoglio’s story dominates the first conversation as he, humbly, asks that he be allowed to return to a normal life almost as a penitence for what he believes are serious faults in his own life story.

In the second conversation, the roles slowly become reversed and we find that it is Benedict who is having doubts.  As the conversation progresses the two men navigate not just intriguing psychological corners of each other’s minds, but also travel through some of modern society’s, and the church’s, most serious issues.  We learn that, despite Benedict’s rather serious flaws as a Pope, that he, too, has personal strengths and a character requiring respect, if not admiration. (I dare not explain much in detail because it is through these conversations that the movie moves the viewer through levels of discovery and, even, plot.

McCarten’s script is superb and I’m not quite sure why he didn’t win the Oscar – this is a better script than the Oscar winner in the adapted category, JoJo Rabbit.  The movie is almost exclusively two hours of ‘talking heads’ as two men argue and sympathize and, in the end, find a certain kind of friendship.  McCarten manages to keep the lines moving and the conversation is never dull or plodding.

But it takes two remarkable actors to bring the script to life and both of them were nominated for Oscars.  Anthony Hopkins was nominated for Supporting Actor even though he seems to have as many speaking lines as the other guy.  Hopkins received three acting nominations in the 90s for Amistad, Nixon, and Remains of the Day after winning the Oscar for his character defining role as Hannibal in Silence of the Lambs.  In Two Popes, Hopkins isn’t consuming any human flesh, but he does play an irascible Pope with wit and grace.  Hopkins brings to the role many facial twists and turns and adds appropriate snorts and sighs in all the right spots.

Jonathon Pryce received a Leading Actor nomination for his role as Cardinal Bergoglio/Pope Francis.  Pryce played Glenn Close’s husband in Wife, but this was his first nomination.  Partly he was selected because of his remarkable resemblance to the real Pope Francis (Google it for some amazingly similar pictures.) But Pryce brings just the right combination of humility and compassion to his performance here which is so intimately contrasted with Hopkins firm control.  Obviously, I have never met either Pope, but I’m not sure it matters – the characters these two actors develop are real enough to the story’s important message.

Some Catholic partisans have argued that there is almost nothing factually accurate about this story.  It appears that there is no record of the Two Popes ever meeting, much less having these kinds of extended conversations.  It does not even appear that Pope Benedict had any real say in the matter of who his successor would be.  So, like a lot of stories from Hollywood, this is a work of fiction, not a documentary.  Still, I’m not sure it matters.  At the time of the transition, the Church was going through serious existential discussions.  Although many welcomed Pope Francis’s attention to matters of justice and equity, as well as addressing the serious problem of priest pedophilia, the transition was not an easy one and has implications for all of us.

So what the movie offers is not a precise presentation of church history, but rather a fascinating probe into what the discussions at least should have been about.  It is hard to believe that you can spend two hours watching two men talk to each other – no car chases or gunfights – just two old men trying to explain such simple questions as what their role in society is and what the Church can do to make it better.  But I think there is also a bigger reason why these conversations are so compelling.  It isn’t just the Catholic Church that must address these two almost-conflicting concerns, but the broader society as well.  These men are talking about, really, the two main threads that we as social people must always confront – the dichotomy between change and consistency, liberalism and conservatism.  Simple things, really, but oh so important.

A very enjoyable movie with maybe a limited appeal. (4 Stars) 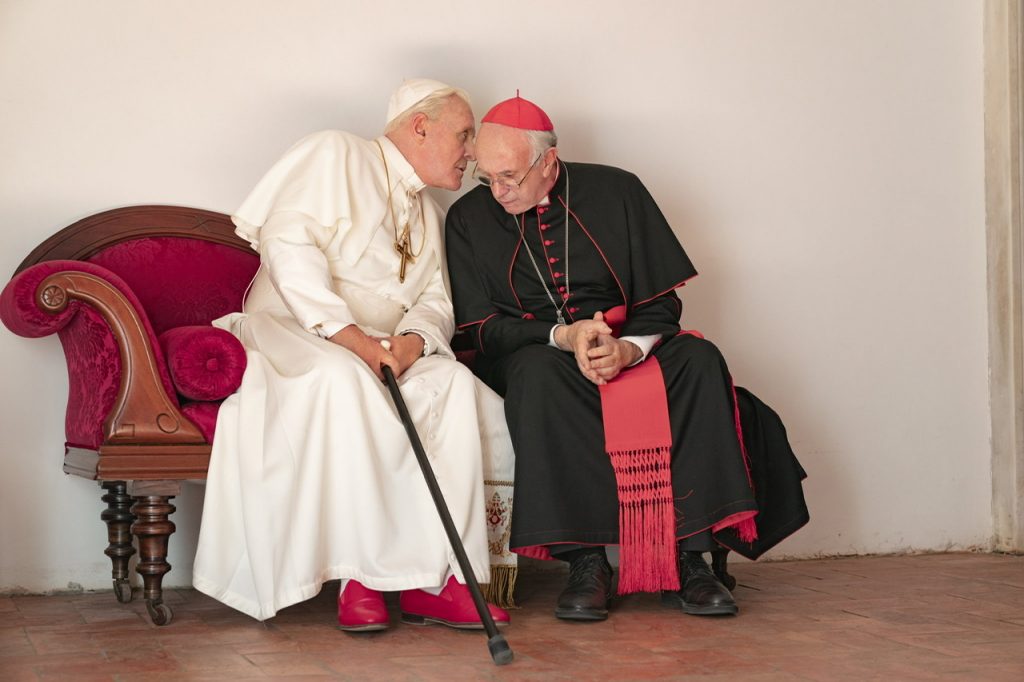