(3.5 Stars) Liberals will find humor and lots to support disliking Cheney. Conservatives, well, maybe you should avoid this one. 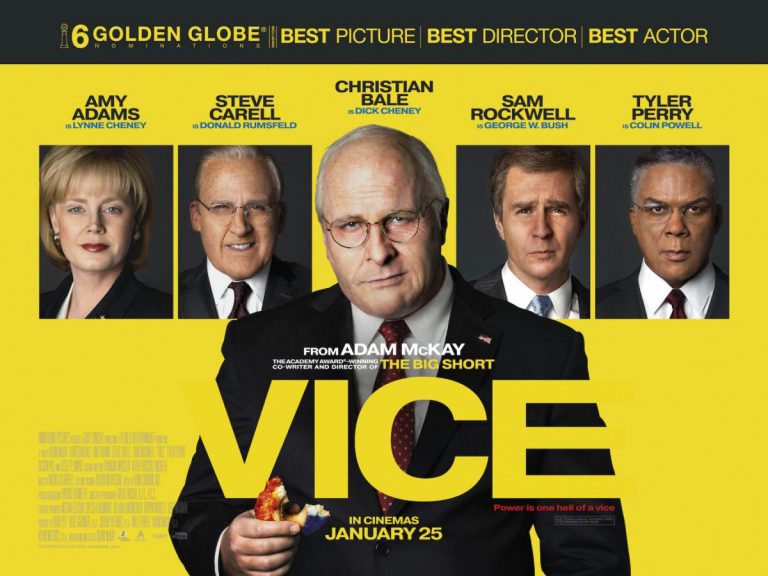 Your reaction to this movie is, not surprisingly, likely to depend on your politics. If you are a conservative Republican who supported the Bush -Cheney Republicans, then this movie is likely to feed your beliefs that Hollywood is out in left field and doesn’t understand the threats the country faces that require a strong, forceful executive response. If you are such a person, then you are likely to be sympathetic to Dick Cheney’s use of power, especially after 9/11, and his efforts to protect the country from outside threats. I doubt very much that you will find anything in this movie to enjoy and, in fact, it is likely to enrage you and stoke your animosity towards ‘libtards’.

If you are one of those ‘libtards’, like me, then you will probably howl with delight as the movie Vice reinforces everything you believe about that presidency and, especially, how Vice President Cheney significantly expanded the power of the executive branch in frightening and morally questionable ways. The movie makes no compromises in painting Dick Cheney as a power-hungry deviant who personally and politically dominated President Bush and controlled the levers of power as they have never been manipulated before. And it paints that character in ways that are often funny, creating a movie that is somewhere between a farce, a comedy, and an American tragedy of immense proportions. Liberals will love this movie and possibly wonder why it didn’t do better at the academy awards.

It did show promise there, coming in third in last year’s Oscar nominations race with 8 nominations, six of them ‘above the line’. It was in the race for Best Picture, but lost to Roma, a much less political movie. Adam McKay was nominated both for directing and for original screenplay – truly this was his creative exercise and the successes, and failures, of the movie belong mostly to him. McKay made his name as a writer for Saturday Night Live and partnered with Will Farrell writing Anchorman, and Talladega Nights. Clearly his background is in comedy and he brings a lot of that comic sensibility to this movie. McKay won the Adapted Screenplay in 2016 for his work on The Big Short, which was also nominated in four other categories, including best picture. In The Big Short, McKay proved that he could take a complex topic (the 2008 financial crisis) and ‘explain’ what happened by breaking the pieces into comic interludes. By themselves, the interludes made little sense, but, as a whole the movie successfully makes a mockery of those who, trying to satisfy their own greed, sent the country spinning into the worst economic crisis since the Great Depression. I enjoyed The Big Short very much and gave it 4.5 stars.

Unfortunately, I can’t say that Vice stands up to the same kind of treatment. A number of professional reviewers have argued that Vice is a shallow movie. While it has some intriguing and very clever moments (wait for the premature ‘end of the movie’ credits or the ‘out-of-the-blue’ Shakespeare scene) the end result of this movie is substantially ‘nothing new’. There is no new revealing information about Cheney, either the man, or in his role as Vice President. All the horrors that roll off his tongue or emanate as policy from his office, are well known to us liberals and we aren’t exposed to anything to challenge our assumptions or even to stretch them. Where McKay gave us plenty of new things to think about in The Big Short, here he is superficial in coverage. As Brian Tallerico of Rogerebert.com put it “(Cheney’s) legacy doesn’t deserve something as toothless as ‘Vice’.”

These failures aren’t the fault of Christian Bale, the talented actor who portrays Cheney. Bale put on 45 pounds to play this role and spent hours each day in the makeup chair to look like Cheney at multiple points in his life. Bale, who made his name as Batman in two of those movies, was nominated for his role in The Big Short as well as in American Hustle where he was terrific in an ensemble performance. Here, you can’t fault Bale’s portrayal of Cheney – ‘inspired by Satan’, he gives a very credible performance. Towards the end of the movie, he leans in to the camera (us), and in a speech that will rouse admirers and inflame Cheney’s critics, Bale delivers Cheney’s justification for his ends-justifies-means behavior. (My own father, who is now deceased, was extremely active in Wyoming Republican politics during the 50’s and early 60’s at the same time Cheney was starting his career. I remember Dad later telling me that even he couldn’t trust Cheney as far as he could throw him. And a big part of the reason was Cheney’s believing that his goals were so important that they should be achieved at any cost.) 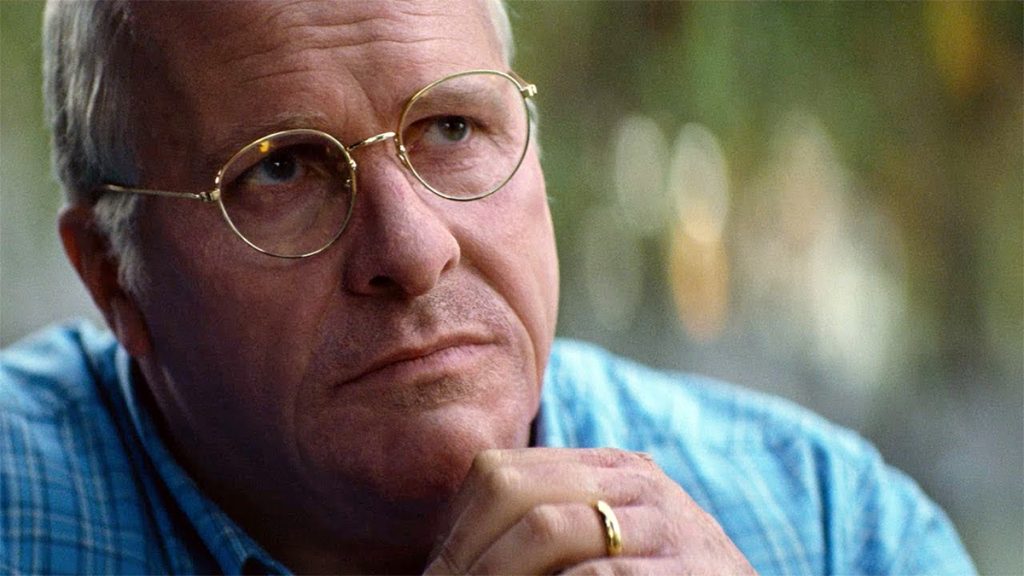 Sam Rockwell and Amy Adams also received nominations for this movie. Rockwell previously won supporting actor for his role in Three Billboards Outside Ebbing…. In Vice, he plays a truly wimpy George W. Bush. His character shows little awareness of how much he is being manipulated by Cheney. In historical reality, that was likely true at the beginning of the Bush presidency, but most people agree that Bush and Cheney weren’t exactly buddies by the end of their administration.

Amy Adams play Cheney’s wife, Lynne. Although she is one of my favorite actors, her role here really doesn’t give adequate range for her talents. She has one nearly flawless scene early on where she tells Dick, in no uncertain terms, that he has to shape up if he is to keep her. The way the movie tells it, this one experience had a lasting effect on Cheney, keeping him focused on mastering power for the rest of his life. I’m not sure that one single event like that would have that effect, and this is another example of how the movie simplifies real-world history to an untenable degree.

Vice received another nomination for Hank Corwin for film editing. He filled the same role for McKay in The Big Short. In both movies, editing is a key component of bringing the dramatic and comedic scenes together, however it achieves a better effect in the earlier movie.

The only Oscar Vice won – out of eight nominations – was in the makeup and hairstyling category. Greg Cannom also won this category for his work in the Curious Case of Benjamin Button. In both cases, he displayed an uncanny ability to modify an actors face to express both a younger and an older version of himself. Indeed, it is difficult to recognize Bale behind his Cheney makeup.

Vice, in one section of the movie, plays an extended riff on Shakespeare where the Cheney couple, in bed reading, engage in a farcical rendering of Shakespearean lines. Although somewhat comic, the diversion is exactly what is wrong with this movie. While it might be absurdly fun to have Margot Robbie explaining financial derivatives while sitting in a bubble-filled bath tub (The Big Short), the extended Shakespeare dialog in the middle of Vice does not have the same comic effect. We might chuckle a bit, but when the scene is over, instead of a feeling of relief from a substantial subject, we are left wondering just what that was supposed to tell us about this powerful couple.

Vice, however, is about a man and his relationship to power, a theme that has been well explored. This movie, though, doesn’t expand our understanding, it just painfully punctuates our knowledge of a man we understand as evil. The movie can’t do justice to its subject. As Tallerico says Vice is “full of sound and fury, signifying nothing.”

Although I laughed at times and enjoyed poking fun at a man I despise, I can’t give Vice – as a movie – more than 3.5 stars.