Four Good Days (2*) is a good start, but it doesn’t go far enough in understanding the grief of a parent. 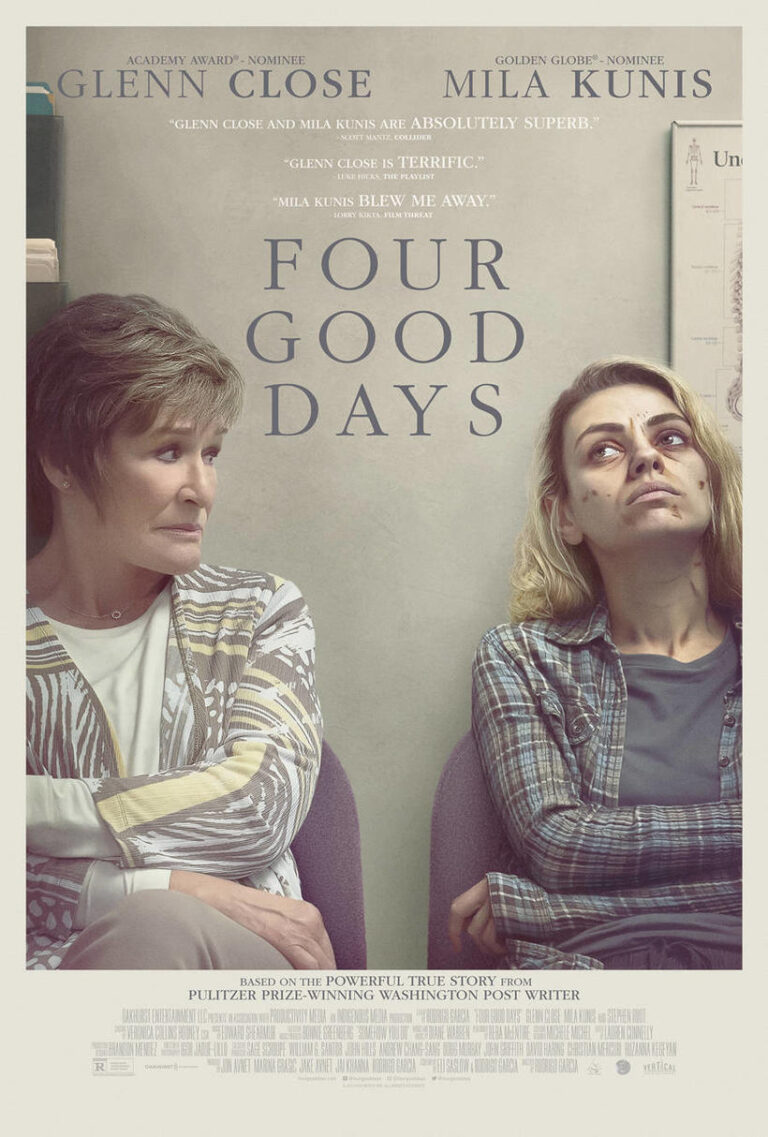 It is more than a little strange that Four Good Days ends up being the last movie of the 2022 Oscar year.  I know how it got there – because it received only a single Oscar nomination in a category that I don’t even think should be in the Oscars – so I didn’t consider it all that important and put it last on the list. Still, unknown then, this film hits home in many very uncomfortable ways.

It is a relatively short film based on a rather long article in the Washington Post by Eli Saslow telling the true story of Amanda and Libby Wendler, a daughter and mother living in Dearborn, Michigan.  Amanda was a 31-year-old drug addict who had been in and out of rehab a dozen or so times.  The story recounts how Libby, her mother, once again attempts to help her daughter through recovery and rehabilitation, and then gets her started on monthly injections of naltrexone.   (Naltrexone blocks the effects of opiate drugs so, essentially, you can no longer get high.)  The article is interesting and is worth a read).   It should be noted that, as of the date this movie was released, Amanda had been clean for four years – a noteworthy accomplishment – and we can only hope she has remained clean!

Four Good Days is based on the Washington Post article, but they change the names and locations.  It is now in Southern California (probably to hold costs down), and Amanda is now Molly and Libby is Deb.  Molly is played by Mila Kunis and, giving credit where it is due, she obviously lost weight and did other things to her body to look much like we think an addict should look – skinny with sunken, dark eyes, unwashed skin and hair, and a general ragged look that generates more disgust than empathy.  (Towards the end of the movie, we see Mila more like she normally looks, which is, frankly, beautiful!). Kunis, born in 1983 in the Ukraine, got her acting career start in That 70s Show and has been on almost every list of 100-most attractive women since then.  So to see her early in this movie is, in fact, quite shocking.  Although she has no Oscar nominations to her credit, she had a memorable performance in Black Swan.  As Molly, Kunis captures the nature of how an addict lies and manipulates.  Still, for me, something was just a little off – like she didn’t quite understand the desperation that ultimately motivates an addict.

Glenn Close plays Molly’s mother, Deb and Close definitely has an Oscar history.  Even after eight nominations, she has never won the Oscar and that’s despite her performances in Fatal Attraction and Dangerous Liaisons, probably her best work.  Since the 80s, she’s done a few things, but her only recent roles that garnered much attention were  in Guardians of the Galaxy films and then her deserved nomination in The Wife, which I thought was very good.  Her role here, as the mother of a drug addict, is more nuanced, and more important, than her similar role in another movie on last year’s Oscar list – which I really didn’t like – Hillbilly Elegy.  Her performance in this movie is good and reflects a lot of what a parent goes through trying to deal with an addict child, but still doesn’t seem real enough.  Why, for example, does she profess to love her child, but still continue to enable her addictions?  The conflict is real, but her character’s resolution isn’t.

The acting from Close and Kunis isn’t great, but it is watchable.  What maybe isn’t watchable, is the script.  Although the script tracks closely the Saslow article, it seems to expose the problem of converting a piece of journalism into a full length movie.  In an article, words have to be interpreted by the mind to conjure a picture – we fill in the gap with our imaginations.  In a movie, the artists attempt to supply the picture.  But only when the writers and directors are careful in their crafting, can they fill all the holes and create a bigger picture than the words themselves supply.  This script, by taking the article almost to the letter, leaves too many holes and supplies too many trite and obvious metaphors (e.g. a jigsaw puzzle with a piece missing…).  By adhering too closely to the original article, the writers missed the opportunity to fill in more creative visual options.  And in trying to add more drama to the story, they end up creating unrealistic scenarios, like being able to get a next day dental appointment, for a brand new set of teeth!  Or how, within a matter of just days, she arranges to appear in front of a class of students to talk about how drugs have ruined her life.  While these scenes illustrate many of the problems and confrontations addicts face, life just doesn’t happen that fast.

As I’ve said in many other reviews, the ultimate responsibility for a movie lies with the director.  In this case the director, Rodrigo Garcia, was also the co-writer, with Saslow, of the script.  So he assumes most of the responsibility for whatever is good or bad about this film.  Garcia received an Emmy nomination for his work on the TV series, Big Love.  But his biggest movie experience appears to be directing Albert Nobbs (which also garnered Close one of her Oscar nominations).  I have to admit that I have seen none of his work before this movie, so I can’t say where he is coming from.  But he seems to have taken a very low-budget approach to this film and maybe simply didn’t have the money, energy or motivation to suggest more creative imagery.

One place where he probably did spend a little money is in hiring Howard Berger to do Molly’s dental prosthetics.  Yes, addicts tend to let their teeth go and the result is pretty miserable looking mouth.  We see that in some of the first scenes of the film.  Berger won the Makeup & Hairstyling Oscar for one of the Chronicles of Narnia movies and was nominated for his work in Hitchcock and also did work on Once Upon a Time … in Hollywood.  Another person on the Makeup team moved over – with Glenn Close – from Hillbilly Elegy.  Molly’s teeth, hair and face are all very accurate looking.

So Four Good Days is just not giving us a completely accurate portrayal of the addiction issues. And the reason I know that is because, unfortunately, I know too much about the issue. Sure, I could talk about how I drink a little more than I should and, so, am perfectly aware of how an addict rationalizes and denies.  But my intimacy with this subject matter goes much deeper than that because I am, like Deb, the parent of someone like Molly.  I know all too well, how the adult child, that I love very much, lies, cheats, and steals.  In the course of just a year, my daughter – same age as Molly and who has also been in rehab multiple times – stole cash from my wallet and jewelry from my wife’s jewelry box.  She stole and forged one of my checks.  She took my precious LandCruiser out one night, without my permission, and got arrested for drunk driving.  At 2:00 AM, I had to rescue my car from the police, and pick her up at the county jail.

And then we find out she’s pregnant!  We discuss options, but even as I warn her that “there is an imminent train wreck”, she chooses to do nothing, milking the care she is getting on state Medicaid.  Then, even while pregnant, she begins using, again, upstairs in my own house.  (I later find burnt foil packets of something I can’t even guess at). I came to realize that she can’t even take care of herself, much less a newborn.  Seeing that she was only manipulating us to satisfy her own selfish needs, I ended up doing something that even a police detective couldn’t understand – I threw a pregnant woman out of my house to join the ranks of the homeless.  If you can’t imagine how someone can do that, then you don’t understand how parents of an addict are completely used and abused until they have to take drastic actions just to protect themselves.

(For those interested, my daughter had the baby, but because the baby had drugs in his system, the state took custody of my grandson.  Although she tried to gain parental rights through the courts, the system recently granted full custody to the baby’s father.  At this point, I have had one text message with my daughter in the last year and I have no idea where she is.  In short, I’ve lost both my grandson and my daughter.)

So forgive me if I find Four Good Days a little weak on the drama side!  There is a lot more emotion involved in these situations and Molly and Deb only START to get the emotions right, but they don’t seem to have any idea where all of this can ultimately go.  I think its terrific that Molly/Amanda have had four years now of being clean.  But there are many more stories out there that don’t end anywhere near as well.  (2*)

Stream on Hulu or rent from multiple sources, or wherever you get your discs! 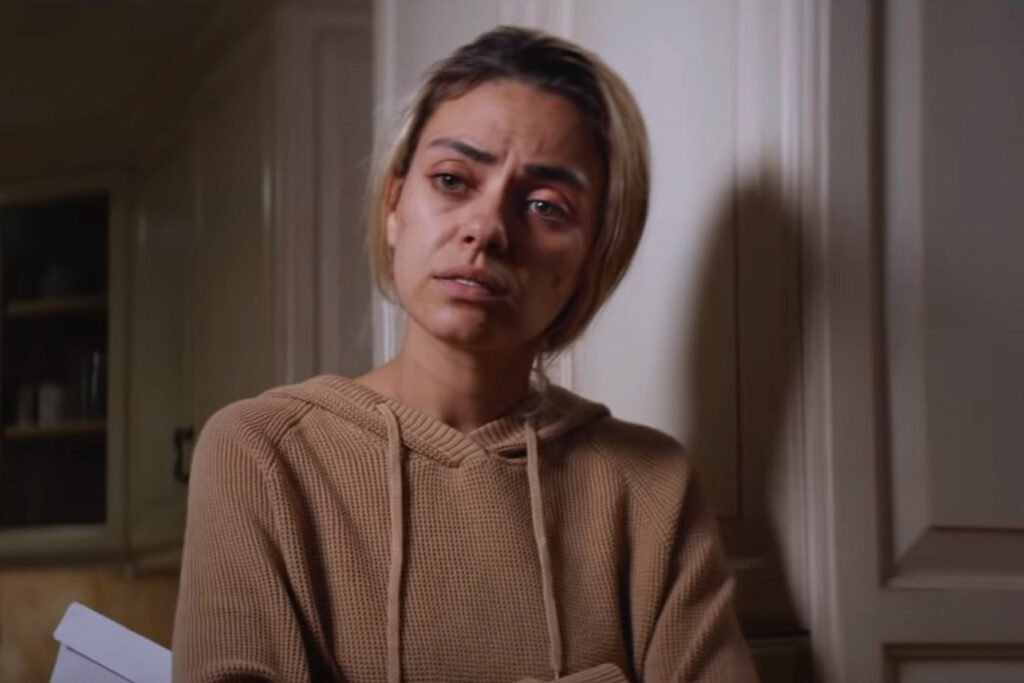